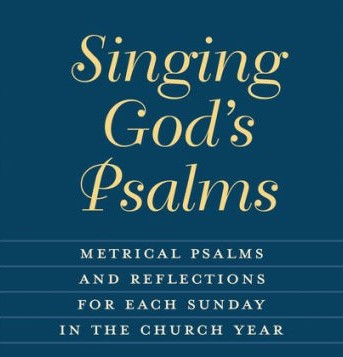 The former pastor of Madison Avenue Presbyterian Church, New York, has produced a very useful and stimulating volume. Nine years into ministry, when facing ‘burn-out’, he remembered a comment by Professor Bernard Anderson (no relation) at Princeton. This was to the effect that when you felt yourself ‘dry’ in ministry, begin praying the Psalms. Fred Anderson began versifying the Psalms, finding that he could complete one a week. He was aided by the fact that he was trained as a singer and choral conductor. His aim was that the words would sing, and be singable. The result was that in 1985, fifty of his renderings were published under the title Singing Psalms of Joy and Praise, while fifteen were included in the Presbyterian Hymnal (PCUSA, 1990).

It is encouraging to see the way in which Anderson has performed his task, and also to know that he is attempting to get congregations to use the Psalms much more in worship. One limitation is that he has based his selection on the common lectionary, so that all the Psalms in it, over a three-year period, are covered. This means, as Walter Brueggemann points out in the preface, that many poignant psalms, especially those of lament and complaint, are not included. His additional comment on this is worth quoting:

That of course is no failure on Anderson’s part; rather it reflects the timidity and cowardice of a lectionary that seeks to protect us from the less “friendly” aspects of the Psalter. One may hope for a much-needed revision of the lectionary in this regard so that more such psalms could be included; that would send Anderson back to work, to the great benefit of the church (p. viii).

The decision was made to use well-known hymn tunes, and while this is commendable, ensuring that congregations will be able to sing these settings, it does have limitations. As Anderson himself notes, not all tunes within a particular metre have the same stress patterns as the words, and this produces a conflict between music and words. Also, some psalms are very difficult to transform into a good metrical setting, and this is compounded when it is matched to a known tune. New melodies may be necessary to accompany new translations.

Along with printing the metrical words, and suggested tunes, Anderson has linked with them a commentary/reflection on each psalm. These vary a good deal in length, and while making some useful comments, do not contain sufficient theological content to let readers (and singers) grasp the richness of the psalms. In the Preface, Anderson hints at that when he writes of ‘the psalter as the first testament’s gospel, as so much of the gospel of God sings forth from it’ (p. xii).

One other limitation also requires notice, and that was his decision to use inclusive language, not only of the human family, but also in reference to God. While this was his denomination’s position, it fails in that that many passages are not strictly translations of the Hebrew text. His choice of ‘Lord’ and ‘King’ as substitutes for ‘him’ may not distort the meaning, but cannot claim to be representing words in the Masoretic text.This is a promising and helpful book, pointing in the right direction. All the psalms need presentation in a form like this, but with stronger theological orientation. That would make it much more acceptable and useful in evangelical churches, and also enrich the praise of God’s people.

God and the Pandemic: A Christian Reflection on the Coronavirus and...

Attending to the National Soul: Evangelical Christians in Australian History, 1914–2014

Is Inerrancy a Reformed Doctrine?