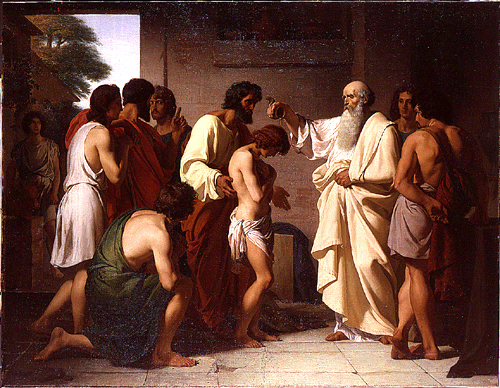 The interruption of in-person worship services has brought several questions and challenges. Is it possible to celebrate the Lord’s Supper online? How should we understand the communion of saints when we are not able to meet each other? One particularly difficult question is how we should understand the promised presence of the Lord when we are not able to gather in the name of Jesus (cf. Matthew 18:20). Without meeting together to worship the Lord, it is hard to appreciate what the author of Hebrew instructs: “But you have come to Mount Zion and to the city of the living God, the heavenly Jerusalem […] to God, the judge of all” (Hebrews 12:23).

This role of the word of the Lord is based on a particular theological understanding of God’s revelation. Having previously focussed on biblical studies, I have been catching up lately on some readings on the doctrine of revelation. L. Berkhof’s Systematic Theology was the main text book during my seminary days, but more recent theological treatments demonstrate some encouraging developments on the topic. In particular, it is helpful to take into account the presence of the Lord in understanding his revelation. For example, Michael Horton writes: “Revelation cannot simply be revelation about God […]; in revelation God is present in personal address.”1Michael Horton, The Christian Faith: A Systematic Theology for Pilgrims on the Way (Grand Rapids: Zondervan, 2011), 117. This understanding of the doctrine of revelation has allowed me to pay careful attention to some details in the biblical passage that I was reading for my personal devotions. It has also been the case that reading this passage in the context has also provided a biblical concept on the presence of the Lord which is often amiss in dogmatic construal. This experience confirms what any evangelical student at a good theological college is taught: biblical and dogmatic (or systematic) studies should be informed by each other.

Function of the Word of the Lord

The Bible text in question is 1 Samuel 3. It deals with the well known story of Samuel’s calling. In considering the presence of the Lord, the ending verses of the chapter, 1 Samuel 3:19–21, are intriguing. One purpose of these verses is to demonstrate Samuel’s equipping as a prophet of the Lord: “all Israel from Dan to Beersheba knew that Samuel was established as a prophet of the Lord” (3:20). Here, one of the first prophets whom (as was promised in Deut 18:18) God had raised like Moses, is introduced. Samuel’s case also shows what is necessary for an effective prophetic ministry. It is unambiguous that the presence of the Lord plays an important part in forming Samuel as a prophet of the Lord: “the Lord was with Samuel” (3:19). This presence of the Lord is also the very reason why Samuel’s words did not “fall to the ground.” It implies that God, who was with Samuel, worked with the words uttered by Samuel in such a way that they became effective among the Israelites. For the present purpose, it is noteworthy that God’s Word functions as a means for his presence: “the Lord revealed himself to Samuel at Shiloh by the word of the Lord” (3:21). The days when the word of the Lord was rare and visions were not frequent are gone (cf. 3:1). To equip the boy Samuel as his prophet, the Lord revealed himself by his word. As a result, the Lord was with Samuel.

This instrumental function of the word of the Lord in 1 Sam 3:21 is noteworthy. It is by [be in Hebrew] the Word of God that the Lord revealed himself to be with Samuel. It reminds me of what I first learned from Berkhof: the word of the Lord serves as a means of grace. Here is one clear biblical proof text for the Reformed/Presbyterian teaching on the Word of the Lord as the means of grace. In understanding this means of grace, it is important to know the subject who uses these means of grace. Wayne Grudem, who wrote a popular text book on Systematic Theology, seems to understand that the believers use these means of grace. Hence, he includes other activities, such as worship, giving, evangelism, etc., in the list of the means of grace.2Wayne Grudem, Systematic Theology: An Introduction to Biblical Doctrine (Grand Rapids: Zondervan, 1994), 951. Nevertheless, Grudem fails to note an important insight from the Reformation tradition. The ultimate subject who uses these means of grace is the Lord himself, as implied in Q. 88 of the Shorter Catechism: “what are the outward and ordinary means whereby Christ communicates to us the benefits of redemption?” The Catechism does not separate the work of the Trinity since it is the Holy Spirit who makes the word “an effectual means” (A. 89). In these activities of God the Trinity, the active presence of the Lord is palpable. God’s people can experience his presence when the Lord makes use of his means of grace among them. This understanding is based on a biblical text like 1 Samuel 3:21 which states that the Lord revealed himself by the word of the Lord.

When we understand the Lord’s presence with Samuel against the temple background, it is possible to observe the significance of the episode in 1 Samuel in redemptive history. In Samuel’s days, the Israelites used to go up to Shiloh to worship the Lord there. After the capture of the ark, however, there was no need to do so. The end of Shiloh as the dwelling place of the Lord had come to an end. At this point, we can observe an important pattern in God’s redemptive history. God forsakes his dwelling place because of the transgressions of his people. This is the main point in the prophet Jeremiah’s temple preaching: “Go now to my place that was in Shiloh, where I made my name dwell at first, and see what I did to it because of the evil of my people Israel” (Jeremiah 7:12). Jeremiah continues: “therefore I will do to the house that is called by name (i.e. the temple) […], as I did to Shiloh (Jeremiah 7:14). Because of the sins of the Israelites (those of the sons of Eli, in particular), the Lord “forsook his dwelling at Shiloh, the tent where he dwelt among mankind” (Psalm 78:60). Yet, the capturing of the ark and forsaking Shiloh do not mean that the Lord does not dwell with his people. The Lord provided a means of grace, the word of the Lord, to secure his presence among his people. The Lord was with Samuel since he continues to reveal himself by the word of the Lord.

We have noted a combination of dogmatic and biblical teaching on the function of God’s word for his presence based on 1 Samuel 3: 19–21. It gives much to consider in contemplating God’s presence in our Christian life and ministry. Three points can be highlighted.  First, when we argue that God’s word should be the principle of our worship and life, it is the presence of the Lord we are mindful of. Hence, it is our hope and prayer that our worship and our life based on God’s word should be the reason why others can say to us that “God is really among you” (1 Corinthians 14:25). Secondly, we should resort to God’s word with confidence when we visit the sick and discouraged. We open God’s word with them, knowing that God reveals himself by his word. Thirdly, those who preach God’s word, even if it is done online,  should do so with conviction that, when the preaching is based on the word of the Lord, he will work with his word in such a way that our words would not fall to the ground. Glory be to God who is with us.

The Gifts of the Holy Spirit

Preaching and the Work of the Holy Spirit Part 2