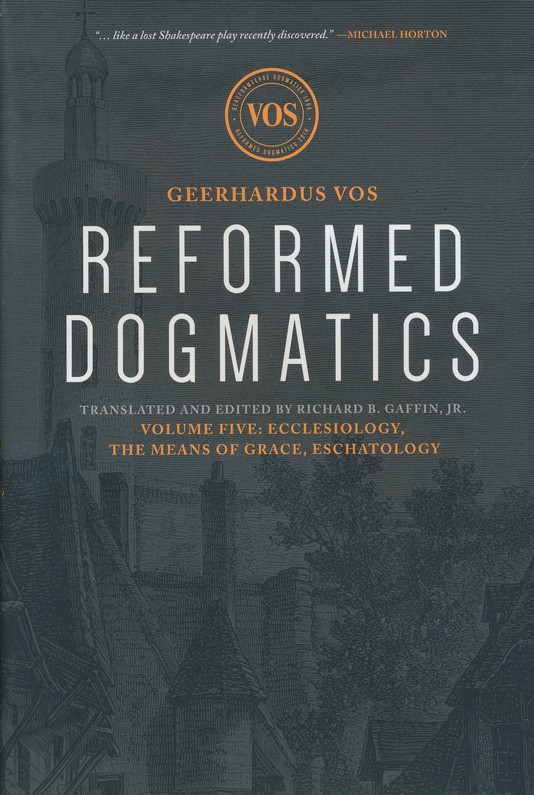 Reformed Theological Review 75.2 reviewed the second volume of Geerhardus Vos’s Reformed Dogmatics (Anthropology), published in English in 2014. The final of the five volumes was published in 2016, and it seems appropriate to belatedly record this event and express thanks to the translator and editor, Richard Gaffin, and the publisher, Lexham Press.

The volumes are worthy of far more than a review notice. Reformed Dogmatics now moves through theology proper (vol. 1), anthropology (vol. 2), Christology (vol. 3), soteriology (vol. 4), and ecclesiology, the means of grace and eschatology (vol. 5). The origin of the work lies in the 1888–1893 lectures Vos delivered at his first lecturing post, at what would later be called Calvin Theological Seminary, Grand Rapids (see Olinger, Geerhardus Vos, as per the review below).

The volumes have at least two strengths. First, somewhat unusually, a catechetical question-and-answer approach is taken. This is a more medieval or Reformational approach to theology, and the reader is the beneficiary. It makes Reformed Dogmatics highly accessible. It means that each topic comes in a manageable, almost minute, size, the issues are well focussed and defined, and the reader is compelled to engage (for who can resist the power of a question?).

The second strength is that Vos stands on the shoulders of giants—though often, he does not declare upon whom he is relying. Reformed Dogmatics reads like a conflation of the best of Reformed thought. Further research would be needed to determine what texts he had open in front of him and the extent to which he relied upon his accumulated knowledge (‘accumulated’, though extraordinarily, he was still only in his late twenties when writing). Some data can be quickly compiled, though. The hastily-constructed chart below details the number of explicit references to various sources (though it does not plot the spread throughout the volumes or the level of interaction with the references. Neither have references to opponents been plotted, such as Schleiermacher, who, with 20 direct references, is one of the few contemporaries with whom Vos regularly engages).

Despite the high number of references to Calvin and Heidelberg, there is not a close relationship in structure, foci or approach (just as it does not feel like and one would not expect that Augustine and Luther are driving the discussion, either). Despite receiving a lower count in the chart, there are wider affinities with Turretin Elenctics, especially in topical interests and structural progression, and even with a question and answer approach. In some respects, Vos feels like Turretin made accessible—precision with less scholastic distinctions and more liveliness (and affirming supralapsarian rather than Turretin’s adamant infralapsarianism).

One appreciates that there is a significant focus on covenant in Reformed Dogmatics, for which the presence of ones such as Cocceius and Turretin comes to the fore. This is useful material even for someone new to the subject. It was within this theological tradition, whilst also drawing on his Old Testament expertise, that Vos went on to carve out Biblical Theology as a discrete discipline. Nothing in Reformed Dogmatics is out of step with that later development, although exegetically, his understanding for Rom 1:3–4 does shift. In Vos it is seen that Biblical Theology and Systematic Theology are not dichotomies.

Calvin is seminal, Turretin offers intricate precision and accuracy, Bavinck has carefully-bounded creativity, but Vos is the pinnacle of accessibility. Reformed Dogmatics could be assigned to theological students as the standard classic Reformed work. Vos’s students may well have complained of his dry lecturing style, but theological students today would surely be delighted to have to read Vos rather than the more difficult alternatives.

Is Reformed Dogmatics a dated work? Oddly, it all but fails to deal with epistemology (following neither Calvin nor Turretin) and so it betrays no awareness even of the contemporaneous fundamentalist-inerrancy debate. There is only one ‘chapter’ with four brief questions and answers on the ‘knowability of God’.

Still, by avoiding specific interaction with his contemporaries, there is a timelessness to the Dogmatics. The modern reader is not distracted by what would now be arcane debate. Combined with an up-to-date English translation, it often feels as though Vos is speaking to today’s issues. For example, a 20th-century claim is that ‘only begotten’ is solely about the Father’s great love for the Son. Vos has already dealt with this, however. Since ‘Son’ is taken literally, ‘It would be very unnatural…to take one half literally, the other half figuratively’ (vol. 1, p. 56). What does ‘generation’ mean, then? Is this the eternal functional subordination of the Son? ‘It is the eternal, necessary act of the First Person of the Trinity…by which He makes this second person to share in the possession of the divine being’ (p. 60). Why, then, is the Son spoken of as a servant (equalling today’s quandary—is He eternally subordinate)? This is the ‘connection between the eternal Sonship of Christ and His work as Mediator’. ‘Because He is the Second Person in the Trinity and so has His personal existence from the Father, it is appropriate that of the three persons He shall be the one sent, who comes to fulfil the servant-work of the covenant. The Son is therefore presented in Scripture as a servant’ (p. 65).

It is lamentable that the English-speaking Reformed world was content to leave these volumes untranslated for more than a century. Perhaps Vos’s quiet personality has made him too easy to overlook. He was not a man to create momentum for himself. Still, he needs to be seen for what he is—the father of Biblical Theology as we know it today, and first-tier Reformed systematician. Reformed Dogmatics is a rare jewel amongst the Church’s treasures.

I Shall Not Die, But Live: Facing Death with Gospel Hope